To minimize installation time, ThermaRail retrofitting consists of coupling the Balance of Plant enclosure (2) and Electrical enclosure (3) to lifting lugs normally equipping the locomotive and to a ruggedized heat exchanger (1). Air-circulates through an auxiliary Radiator (4), which couples the ThermaRail enclosures and completes the retrofitting. All components are vertically integrated and tested at locomotive operating conditions and can be installed or removed during locomotive maintenance activities. 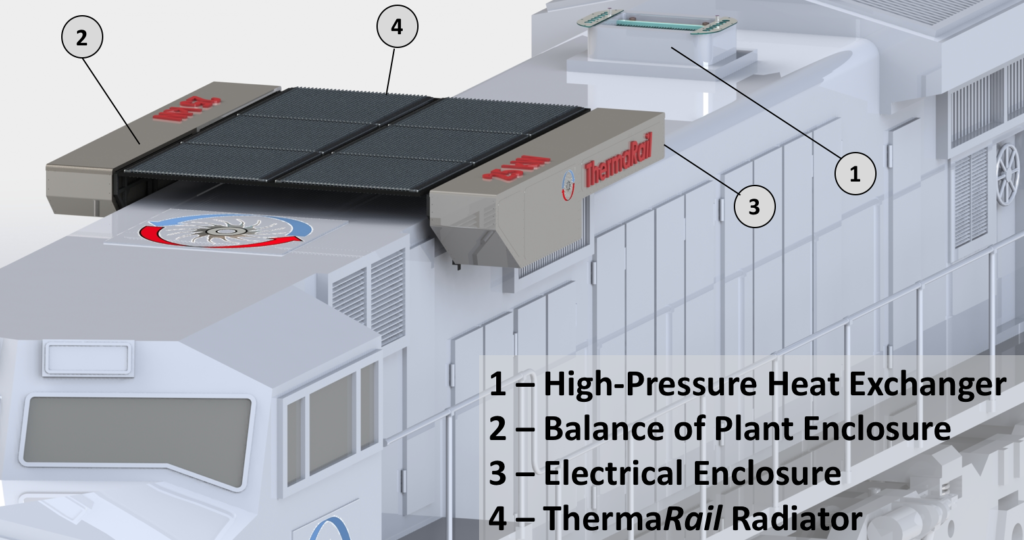 Diesel-electric locomotive fleets are generally represented by a large number of relatively old Diesel-fueled internal combustion engines. Approximately 35% of the fuel energy is used to produce propulsion and electric power for auxiliaries: compressor, pumps, cooling fans and hotel loads. The remaining fuel energy is wasted as thermal rejection to the environment. ThermaRail recovers waste thermal energy via rugged high-pressure heat exchangers (HiPHEXs) non-invasively installed within the locomotive exhaust gas stack. The HiPHEXs are made with components designed to withstand thermal-cycling, vibratory stressors, total loss of coolant and flame engulfment. The HiPHEXs are coupled to a closed-loop thermodynamic Rankine cycle assembled within non-invasive enclosures and optimized to convert waste thermal energy to pollutant-free electrical power. In some configurations, ThermaRail converted electricity can be stored in high-efficiency batteries, which can then be used to off-load the OEM lead-acid battery. For these applications ThermaRail  resolves problems associated with battery deep discharges resulting from prolonged electrical loading. These operating conditions frequently manifest during prolonged locomotive idling as “locomotive idle reduction technologies” as the Automatic Equipment Stop/Start system (AESS) induce engine shutdown to comply with pollutant emissions requirements. With ThermaRail during AESS induced engine stop with the locomotive crew still in operation, the OEM lead-acid battery pack can be dedicated to engine start operations only, while a more efficient auxiliary battery pack, previously charged by ThermaRail power conversion systems, supplies power to the locomotive electrical loads. 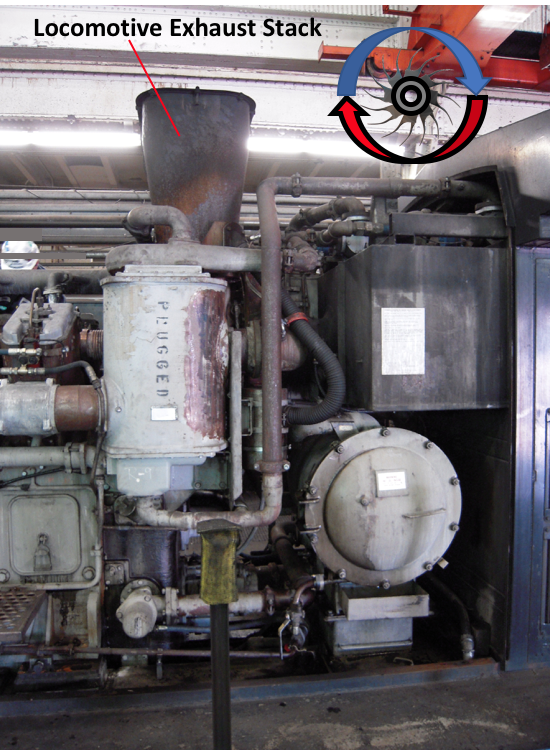 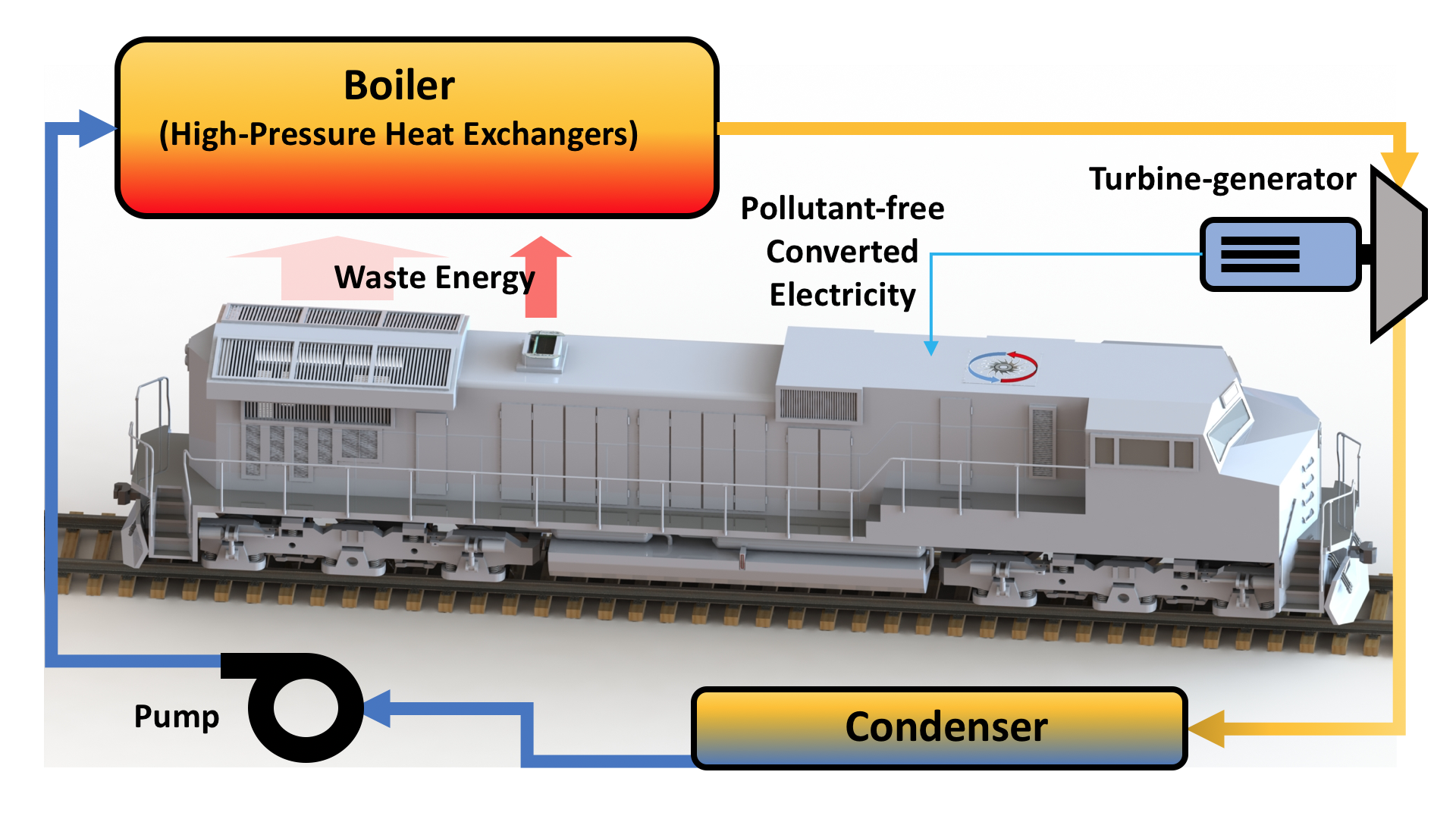 ThermaRail is based on the Rankine thermodynamic cycle, typically utilized in power plants for the production of electricity (e.g., plants fueled with coal, oil, gas, nuclear). ThermaRail’s Rankine cycle consists of a working fluid circulated by a pump through High-Pressure Heat Exchangers (HiPHEXs), wherein the exhaust gases transfer thermal energy to the working fluid. The resulting superheated vapor expands through a turbine coupled to an electric generator. The pollutant-free electricity produced is then distributed to various locomotive electrical loads.

Full-scale testing and locomotive field testing confirmed that the adoption of HiPHEX does not affect the performance of the locomotive engine. The HiPHEXs are designed to generate low back-pressure and do not negatively impact the performance of the turbocharger at all locomotive operating conditions. Even for ThermaRail components configured to allow large portions of exhaust gases to by-pass the HiPHEX, approximately 590 kWt can be recovered from a 4,400HP locomotive engine operated at Notch 8. Scaled versions of ThermaRail components configured to capture only 30% of the exhaust gases thermal energy   (approximately 1/3 of the total thermal energy represented by the locomotive exhaust gases flowing through the exhaust stack) can charge high-efficiency battery packs to off-load the OEM lead-acid locomotive battery DC bus.

Shopping Basket
We use cookies to ensure that we give you the best experience on our website. If you continue to use this site we will assume that you are happy with it.Ok